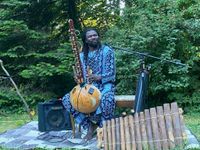 originally from West Africa Burkina Faso, he plays world music from West Africa on the Kora, a 21 string instrument, the peule flute and he sings It is a very intimate and soulful ethical performance.

Lasso Sanou was born in a griot family in a small village in the north of Burkina Faso in West Africa. He grew up in an environment where music and songs were at the centre of people’s lives. Hence, he discovered very quickly his great skills for singing and playing several traditional African instruments. He first learned percussion (balafon, tamani, djembe) and later the Kora. Thanks to his famous cousin, Dramane Dembélé, Lasso discovered the flûte peule in 2004 and developed a real passion for this instrument. He quickly became one of the most talented flutists in the country. After playing for several years in Burkina Faso, Lasso arrived in Montreal in 2009, where he has become a mainstay of the music scene.